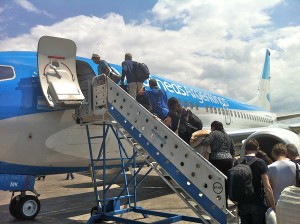 The lunar shadow hits a random part of the globe each time, in 2019 (and again in 2020) it will cross South America. Most people will have to fly over 8000km (5000mi) to chase the total solar eclipse in Argentina. Let’s figure out how to get there!

The biggest international airport in Argentina is Ministro Pistarini Airport in Buenos Aires, also known as Aeropuerto de Ezeiza (EZE). So most probably you’ll have a layover there, and travel further west by either a domestic flight or an overnight bus. However, there are some international flights to Mendoza (MDZ) airport too (shown in black).

According to our research, the best air fares to South America will be available within 5-9 months in advance. This page will be updated in August with more details, once more airlines publish their schedule.

Only direct flights are shown. Note: We have deliberately excluded the countries that border Argentina from this map.

Flights to Argentina from Europe & Asia

from the EU and Switzerland: Madrid, Barcelona, Paris (CDG), Roma-Fiumicino, Zürich, Amsterdam, Frankfurt.
The longest non-stop flights are Frankfurt (11 479 km) and Amsterdam (11 437 km).
from the UK: London-Heathrow;
from Turkey: İstanbul-Atatürk (new airport) with a landing in São Paolo (12 257 km);
from the UAE: Dubai with a landing in Rio de Janeiro (13 878 km).

Note: There was an announcement of the direct flights from Doha and Addis Ababa, though this information is not verified.

There’s only a flight from Auckland.

Ok, what about Asia?

There are no direct flights. It’s located literally on the other side of the globe, so the travellers from East and South-East Asia will have to go a long way around (19,000–20,000km), with layovers in such hubs as Dubai or Auckland. For example, from Singapore and Shanghai, it’s equally far to fly west or east (the difference doesn’t exceed 500-700km).
As Argentina is an antipode of China, it might be a special occasion to those eclipse chasers who watched the 2009 total eclipse.

This site uses Akismet to reduce spam. Learn how your comment data is processed.